The F. Stephen Vogel Award was established by contributions to a fund created by his family and friends. It is to be awarded in recognition of an outstanding paper by a resident or fellow published in one of the Academy journals, Modern Pathology or Laboratory Investigation, during the twelve months preceding the application deadline.

(1) be a USCAP member, in good standing, at least one year prior to receiving the award;

(2) possess an MD, or international equivalent, degree; and

(3) be a pathologist-in-training (resident or fellow) in a program accredited for training at the time the scientific investigation on which the article is based was initiated and substantially completed.

Applicants should be the first author or submit documentation of a significant contribution to the paper.

On papers with multiple authors, only one author is eligible, and only one paper per author may be submitted. The prize will consist of a check for $1,000 and a certificate. Applicants should complete the application form online and electronically submit the form along with a PDF reprint (or preprint) of their manuscript and a PDF of the signed VERIFICATION OF ELIGIBILITY FORM, available HERE. The Vogel Award Committee will select the awardee. 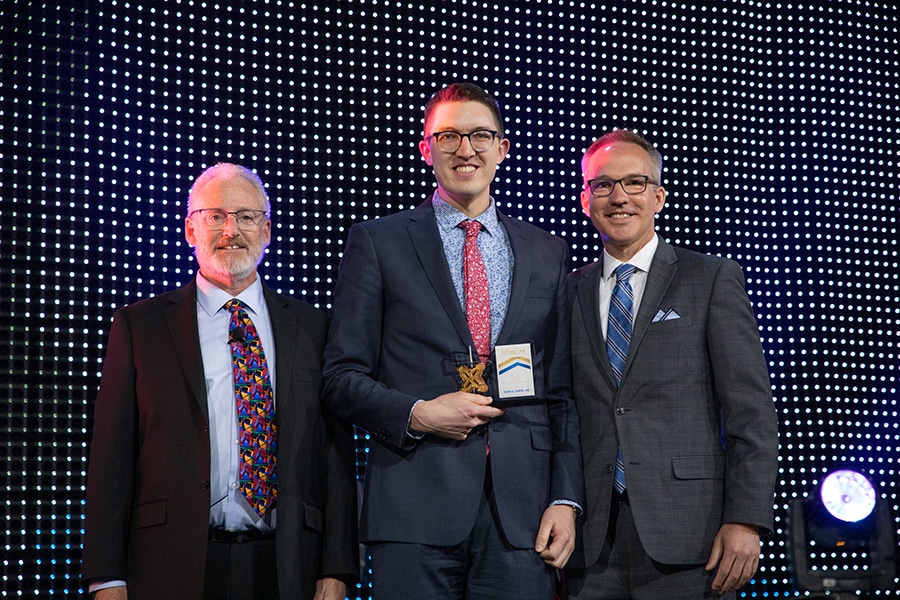 Dr. Chapel grew up on a family farm in Parma Township, Michigan. He completed undergraduate studies in microbiology and Germanic languages & literature at the University of Michigan in Ann Arbor. He began his research work during his undergraduate years, studying mechanisms of norovirus infection and propagation in the laboratory of Dr. Christiane Wobus.

He attended medical school at the Columbia University College of Physicians and Surgeons, where he was a trainee in the Columbia-Bassett Program. While in medical school, Dr. Chapel was a research fellow at the New York Center for Agricultural Medicine and Health, where he conducted field research in agricultural epidemiology and occupational health.

After finishing medical school, Dr. Chapel relocated to the University of Chicago for residency training in anatomic and clinical pathology. He was a trainee in the department for four years and served one year as chief resident. During residency, he began translational clinical research in mesothelioma and in gynecologic cancer. With mentors Drs. Aliya Husain and Thomas Krausz, David examined diagnostic biomarkers in malignant mesothelioma of the pleura and peritoneum, aiding in the distinction of malignant mesothelioma from both benign and malignant mimics. He was the lead author on the first study reporting the epigenetic marker 5-hydroxymethylcytosine as a diagnostic tool in mesothelioma, and the lead author in the first study reporting PD-L1 expression rates in mesothelioma using FDA-approved assays. Most recently, he led a large multi-institutional examination of MTAP immunohistochemistry as a surrogate for CDKN2A fluorescence in situ hybridization in mesothelioma diagnosis.

Dr. Chapel is currently an active member of the International Mesothelioma Panel consortium. During residency training, he also conducted multiple studies on ovarian and endometrial cancer. He led an early study reporting PAX8 expression in a significant subset of peritoneal mesotheliomas, with implications for accurate diagnosis of ovarian carcinoma. With mentor Dr. Ricardo Lastra, he also led a large study demonstrating that universal screening for mismatch repair protein deficiency in endometrial carcinoma can be as effectively performed in biopsy and curettage material as in hysterectomy specimens. With mentors Drs. Jennifer Bennett and Ernst Lengyel, he is involved in multiple ongoing collaborations investigating the genetic, epigenetic, transcriptomic, and proteomic determinants of high-grade serous carcinoma, particularly pertaining to neoadjuvant chemotherapy response and long-term prognosis following surgical debulking, as well as studies of epigenetic determinants of prognosis in ovarian clear cell carcinoma. Finally, a recent publication with mentor Dr. Lauren Ritterhouse established progressive accumulation of unstable microsatellite loci in the progression from endometrial intraepithelial neoplasia to endometrioid adenocarcinoma.

Dr. Chapel is currently a fellow in Women’s and Perinatal Pathology at the Brigham and Women’s Hospital, where he remains actively involved in clinical and research work, with ongoing projects examining the molecular determinants of patient outcomes in mucinous ovarian tumors. He occupies his spare time comparing recordings of orchestral music and opera, preparing needlessly elaborate meals, and meeting friends for brunch.